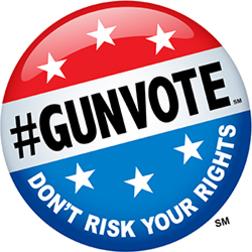 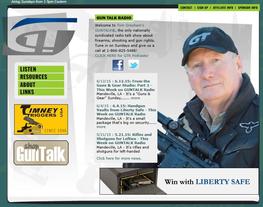 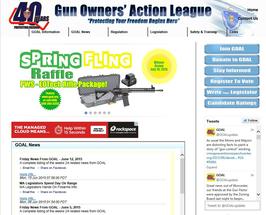 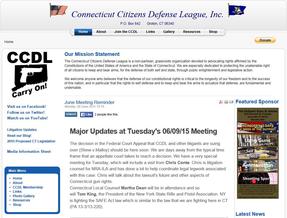 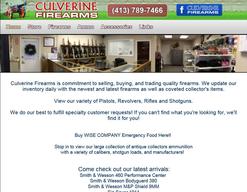 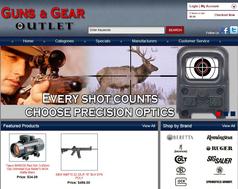 QUOTE: Syndicated columnist Charley Reese (1937-2013): "Gun control by definition affects only honest people. When a politician tells you he wants to forbid you from owning a firearm or force you to get a license, he is telling you he doesn’t trust you. That’s an insult. ... Gun control is not about guns or crime. It is about an elite that fears and despises the common people."

The Stigmatization of Gun Owners (Bearing Arms) We are under assault!

Florida shooting a result of 'abdication of duty': (ABC This Week, video) Dana Loesch, for the NRA, does a great job!

Is This Time Different? (Tom Gresham) We are NOT the problem!

11/6/2017 HR 38, the Concealed Carry Reciprocity bill has passed the US House!
NRA is currently working to enact National Right-to-Carry Reciprocity legislation that would require all states to recognize the Right-to-Carry permits issued by any  other state.
Even though this bill has now passed the House, it is not currently known when or if it will be voted on by the Senate. Write to both your US Senators NOW!

After that, the next step would be to the President.
More information is here: https://www.nraila.org/articles/20171206/house-passes-concealed-carry-reciprocity

As Massad Ayoob has said in the past, Concealed Carry Reciprocity is nothing more than HR-218 for everyone, including the police.

More information on the 'FixNICS bill can be found here:http://fixnics.org/#&panel1-1

Note that the 'FixNICS' campaign was launched in 2013 by the National Shooting Sports Foundation (of which your club is a member).

Write to both your US Senators NOW!

As stated on 'thenewamerican.com' in August 2017:

'Nationally known firearms expert and trainer Massad Ayoob weighed in on the matter on Sunday. He had just finished teaching a class in New Jersey, which he cryptically referred to as “operating behind enemy lines,” adding that “more than a dozen states now have followed the Vermont Model in which no permit is required to carry a loaded handgun concealed for protection in public.” But New Jersey “does not recognize carry permits from any other state.” As a result New Jersey’s Governor Chris Christie has repeatedly granted relief to people such as Shaneen Allen, whose case made national headlines a few years ago. Allen crossed over from Pennsylvania into New Jersey, was subjected to a routine traffic stop that got ugly when she told the officer that she was carrying a firearm. The fact the she also had a Pennsylvania concealed carry permit didn’t matter. She was jailed and only saw the light of day after Christie intervened.'

Go to the GOAL web site for the latest on this issue: http://goal.org.

Here is an interesting story: http://www.bostonglobe.com/metro/2016/07/26/baker-administration-raps-gun-crackdown/pupqSFb406V3UUxK8xEbZI/story.html?event=event25

Keep the pressure on our legislators now!

6/25/16 Part of an important message from Frank Brownell regarding Supreme Court nominations:

'As you know, we are in the midst of the campaign for the President of the United States. This is an extremely volatile time, and we are arriving at a turning point in the history – and future – of America.

While the gun issue seems to be the focus of most of the speeches, and especially in the liberal media, what is really at stake is the make-up of our Supreme Court. The next President will have to make an appointment immediately to fill the seat of Justice Scalia, who died this year. The votes by the current court, with Justice Scalia sitting, on both the Heller decision and the McDonald decision were 5 to 4. The conservative justices were the 5, the liberal justices were the 4. Now the court is 4 liberals and 4 conservatives. Here's a look at the Supreme Court makeup ranked by how liberal or conservative their votes are. Take note where the last two appointees, Sotomayor and Kagan, land on this scale.

The Supreme Court will decline to hear cases involving the gun issue until the new President appoints the new justice. What is at risk here is which kind of justice will be appointed for life. A long enough period to either reinforce or tear apart the Second Amendment.

We care deeply who makes the appointment.

Understand that your vote has an impact beyond the traditional 4 or 8 years of a President's term. It really counts more this time than at any other time in your voting life. With an anti-gun, liberal Supreme Court majority, your children, grandchildren, great-grandchildren and on will not have the personal protection and personal ownership of firearms all of our forefathers and all of us have enjoyed. The Second Amendment will be gutted. We have to join together and support the pro-gun, conservative candidates for the House, Senate and President. Not to do so will change the lives of all of us who cherish our firearm freedoms. It will be devastating, and if we don't vote, we've got no one to blame but ourselves.

We rarely talk politics in our messages, except when we see a real and dire threat to the Constitution of this great country. So, let's "Man Up", as they taught me in the Navy. Exercise our rights as American citizens to keep the Second Amendment alive and in place with a pro-gun, conservative justice on the Supreme Court, appointed by a pro-gun, conservative President and confirmed by a pro-gun Senate.'

Democratic National Committee, Says NOBODY, "should have a gun.".

[Update 12/11/2015] In another attempt to fix a non-existent problem, further restrict gun rights and introduce another abuse of power, the governors of both Massachusetts and Connecticut have announced plans to implement an Executive Order to prevent those on the Terrorist Watch List from purchasing firearms.
On the surface, you might not see a problem. But take another look.
That person could be you!
Do your research (CCDL.org, GOAL.org, etc.) and then call your Governor's office and tell them that we do not need this or any other additional gun laws.
In fact, we could do without a few we have now.

Connecticut 'Assault Weapons' and Magazine Registration
Update 6/20/2016 The Supreme Court has refused to hear this case.

Comments on the decision: http://ccdl.us/component/content/article/38-news/324-shewmalloydecision

Here is the information on the possible pre-ban 'Assault Weapons' exclusion in Connecticut:
http://www.cga.ct.gov/2013/rpt/pdf/2013-R-0453.pdf
And, here is a further discussion regarding this issue: http://ccdl.us/blog/2013/10/17/preban-assault-weapons/

Connecticut Gun Owners Wait in Line to Do Something Many Gun Owners Hope They Never Have To  http://www.theblaze.com/stories/2013/12/26/connecticut-gun-owners-wait-in-line-to-do-something-many-gun-owners-hope-they-never-have-to/

[Update 6/20/2016] This lawsuit went all the way to the Supreme Court, who did NOT grant the petition for this case to be heard.

As a result, this law has been upheld (in CT and NY, since the two cases had been merged0.

Note that the Supreme Court is currently NOT hearing ANY gun-rights cases.

Thank you to all that donated to this effort.

Quoted from the National Shooting Sports Foundation, because we can't say it any better:
"Severely restrictive gun-control legislation has been introduced throughout the country, including in the U.S. Congress and in California, Colorado, Connecticut, Maryland, Minnesota and New Jersey [and Massachusetts]. Other states are expected to follow suit. New York has already hastily passed new anti-gun laws, the severe impacts of which are only just being realized.
Firearms owners are turning out by the thousands at state hearings, but just as important is letting your legislators know by letter or phone call that these proposed bills are unwarranted and an assault on your Second Amendment rights."

Another take on this whole debate from Tom Gresham of GunTalk, in a 2013 broadcast:
Tom says that the 'assault weapons' and 'high capacity magazines' legislation is all a smokescreen to implement 'universal background checks' which is GUN REGISTRATION. Gun registration has only one purpose and that is GUN CONFISCATION.
Gun Talk, is broadcast on the radio and available for download as a podcast from the GunTalk web site or iTunes.

We need to continue writing all of our legislators (local, state and federal) and tell them we do not need ANY new gun laws.

Many organizations have made it very easy to contact your legislators:

Please take a few moments and do this now. The only way we can fight this is to let our elected legislators know what is important to us. Law-abiding citizens should not be punished for the actions of sick individuals, who will not be affected by any new gun laws.

If you doubt the importance of this information, take a look at these two legislative hearings:
US Senate Hearing- January 30, 2013
CT State Gun Violence Prevention Working Group Public Hearing- January 28, 2013

CT- For the latest going on in Connecticut check the CCDL website.
Find your CT legislators.

Sign up for the Shooting Sports USA digital edition, which is NRA's Competitive Shooting Journal or just view the latest edition.

Recalls of ammunition and firearms that we are aware of. Moved from our bulletin board at the club on 9/27/2012 and updated as we are notified. If you know of a recall that is not here, please send it to the Secretary so that it can be included. (NOTE: Because of the size of this file, you may need to open it with a local viewer instead of your browser.)

At the request of a club member, the club has arranged a 5% discount for club members from Missouri Bullet. The special discount code needed is arc-gc.

For those members looking for a club where they can shoot skeet of trap, there are many clubs in this area that have these types of ranges:

If you know of other clubs that offer skeet and trap, please send an email to the club Secretary. Thank you.

See the club bulletin board (inside the door of the club house) for a list of upcoming CT, VT and MA gun shows.